Hearing George Floyd, a black Minnesota man who was killed in police custody in 2020, call out for his “mommy” in his final moments, Emmai Alaquiva struck a chord. The Emmy Award-winning film director, photographer and composer says the feeling “wouldn’t go away” until he “moved in the direction of creating something that meant something.”

The “something” is OPTICVOICES: Mama’s boys, an interactive, multimedia exhibition that explores the trauma of mothers who have lost their sons to systemic violence and aims to highlight their legacy and solidify it in history. The exhibition, on view now through January 29, 2023 at the August Wilson African American Cultural Center, includes 10 portraits of mothers who lost their sons to such violence, including Gwen Carr, mother of Eric Garner, and Valerie Castile, Mama by Philando Castile. There’s also a special tribute to the late Mamie Till-Mobley, mom to Emmett Till.

The show was made possible through AWAACC’s BUILD residency program, developed for aspiring Pittsburgh color artists, and to provide a “platform for diverse artists and organizations that have historically had unequal access to funding and resources to develop new work.” have received”.

Alaquiva says he began work on the show in the summer of 2020, in what “has proved to be a season of emotional and political turmoil around the world.”

For a parent, the loss of a child is the greatest heartbreak imaginable. Losing a child to senseless, racially motivated violence is possibly worse. Tragedies of this kind have been uncounted for decades. What happens to the families when the news cycle is over? What is the life of the mothers left behind?

“OPTICVOICES: Mama’s boys is a platform through which to tell the stories of mothers, families and communities who have suffered from systemic violence,” said AWAACC President and CEO Janis Burley Wilson in a press release.

Among the mothers is Michelle Kenney, mother of Antwon Rose II, whose death comes harrowingly close to Pittsburgh. The 17-year-old was fatally shot in East Pittsburgh on June 19, 2018, sparking protests across the city. The local connection continues with mom Latonya Green and her son Leon Ford, a Pittsburgh resident who became paralyzed after being shot multiple times by a police officer.

When you open the door to the exhibit you will see double yellow lines on the floor going to the back wall. These lines take you straight to the place where both the horrors and the outcry took place – the streets. Captivating photographs of the protests over the past two years surrounding the deaths of the young men hang on the walls. When you see people with megaphones, holding signs calling for change, and kneeling, you are transported right back to that moment. One rather striking photo shows a small black boy, maybe 5 years old, holding a sign that reads “I am human.”

“It’s important to note that the purpose of this exhibit is to understand the relationship between these mothers and their sons,” says Alaquiva. “I want this exhibition to focus on healing and love and not romanticize the murders of the sons.” 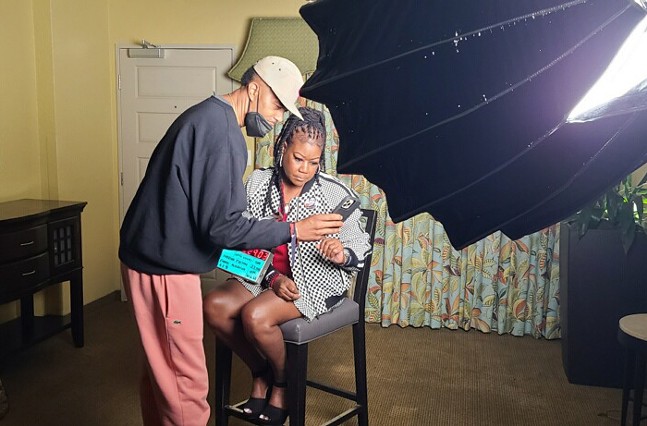 The young men’s personal belongings are carefully displayed. A favorite basketball jersey, a video game controller, a high school diploma — anything to remind you of the life you’ve lived and the dreams you’ve had. As an added bonus to the experience, visitors can discover augmented reality by pointing their phone cameras at select parts to reveal additional images.

The exhibition and an accompanying short film ask “What does healing look like?”. The film allows these women to describe their path to healing in their own words.

Alaquiva tells his “true intention” with OPTICVOICES: Mama’s boys is to “embrace the very core of a mother’s heart through the cathartic vessel of art”.

Wall quotes from moms are especially thought-provoking. One mom points out that part of her healing process was “uplifting the community to understand what unity is.” In the portraits of the Mamas, despite the heavy sorrow they all bear, Alaquiva has captured a light that emanates from each of them. This is shown in the portrait of Lezley McSpadden, proudly holding an artist rendering of her son Mike Brown.

On their respective healing journeys, these mothers acquired tools along the way. One might imagine that strength is one of those tools.