Designed and tested under the most aggressive settings that any card type is designed to handle, OWC’s new Atlas Pro and Atlas Ultra series memory cards are available in both SD and CFexpress formats.

Performance and reliability have been OWC’s priorities as a leading flash memory developer for over a decade. Now the company introduces its Atlas memory card line, designed and tested under the most aggressive settings that any card type is designed to handle. According to OWC, “You can trust Atlas memory cards with your irreplaceable content while delivering the performance and reliability you expect. Go from recording to editing with the Atlas FXR CFexpress portable bus-powered card reader with integrated Thunderbolt and USB support, SD and CFexpress card readers equipped with OWC docks and OWC storage solutions. No matter what you need, Atlas is a tier of an empowering OWC ecosystem that will catapult you forward and upward from ingestion to completion.”

“It’s super important to have gear that doesn’t limit me in any way,” said Jake Chamseddine, tour photographer. From cameras to lenses to the memory cards I use. Having the peace of mind that my cards are not only keeping up with me while I shoot, but also securely transferring images to and from my camera is why I love OWC’s Atlas memory cards so much. Can’t recommend a card more.”

Here is a description of the new cards with prices and availability:

Atlas Ultra SD V90
​If you have a high-end workflow on SD memory card or want to use your camera’s maximum video setting allowed by an SD card, the Atlas Ultra SD V90 takes you to the ultra level – built and engineered to to meet professional content developers’ most advanced use cases, including high burst frame RAW photography and high bitrate 4K and 6K video recording. Designed for action sports, outdoor/wildlife photographers, individual professional photo and video creatives with advanced cameras and camcorders, and independent/small film production companies using DSLR and mirrorless SD card based cameras. With a guaranteed sustained recording speed of at least 90MB/s, you don’t have to worry about dropped frames or missing footage. 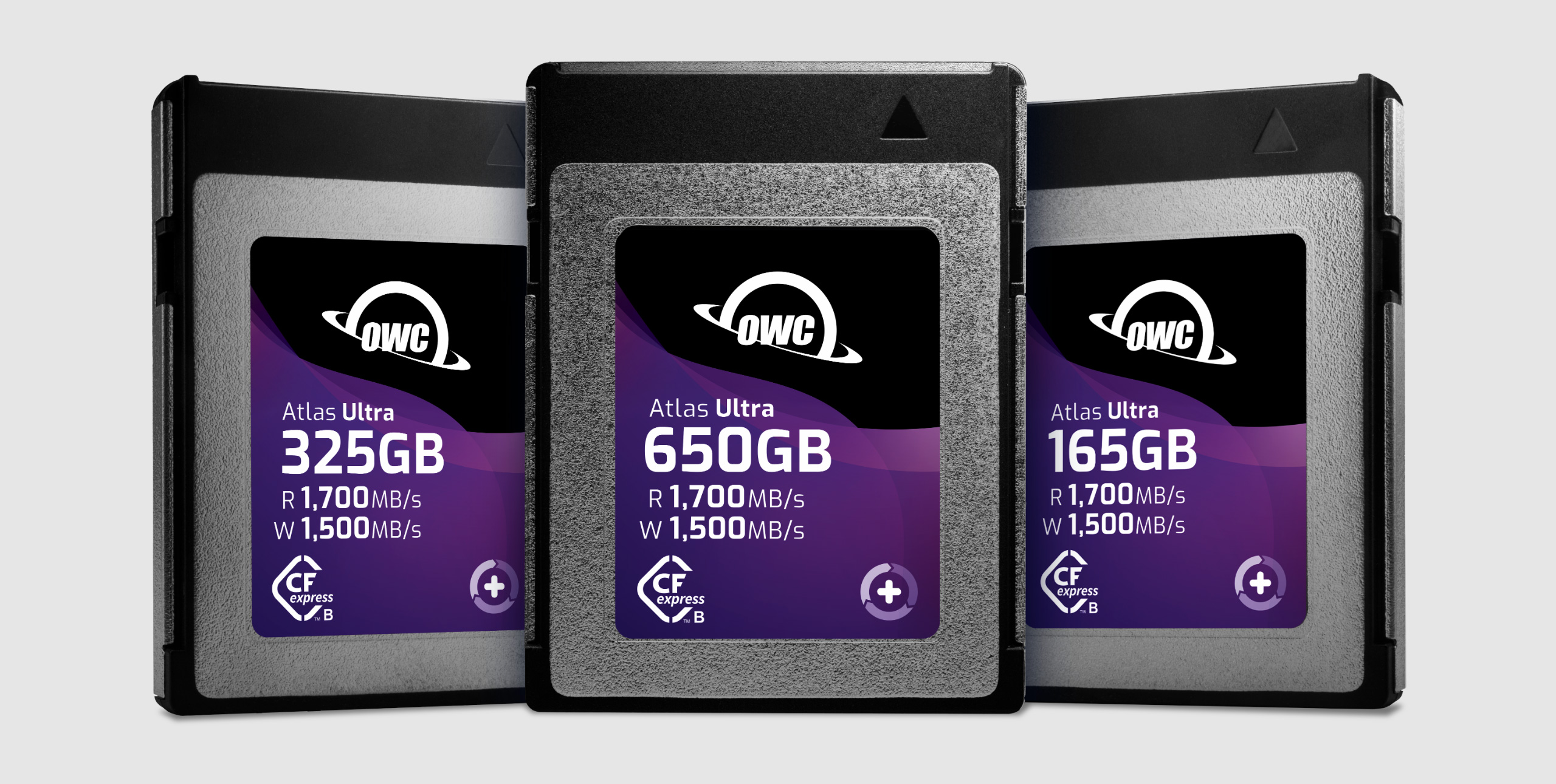 Atlas Ultra CFexpress
Perfect for your most demanding video shoots and extreme action photography settings. With a minimum sustained write speed of 1300MB/s, you can reliably shoot 8K RAW video with your top-of-the-line cinema camera. If you’re an advanced sports or nature photographer, the 165GB version is the fastest and most affordable solution to clearing your camera buffer and shooting continuously in burst mode. Designed for advanced action sports photographers, advanced outdoor/wildlife photographers, professional video content creators, film production companies and feature film studios using DSLR and CFexpress mirrorless card cameras. Both the OWC Atlas Ultra 325 and 650 are RED APPROVED for V-Raptor and V-Raptor XL cameras. 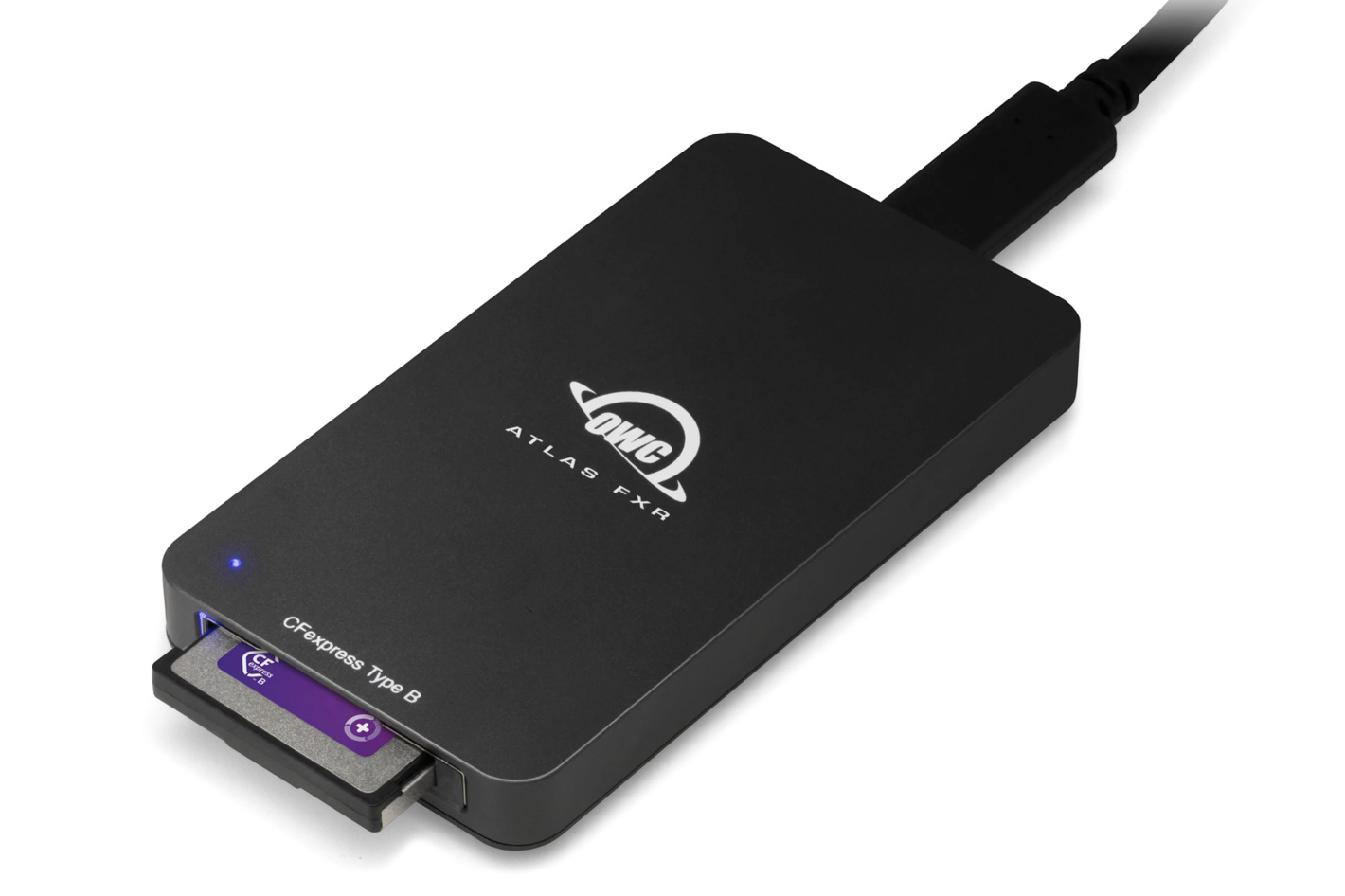 Atlas FXR
​Revolutionize your recording to accommodate the CFexpress memory card workflow with flexible compatibility, Xtreme speed and travel-ready convenience. Transfer video and photos to virtually any computer or tablet with a Thunderbolt or USB port at speeds of up to 1600 MB/s. The Atlas FXR is the size of a debit card and is bus powered. It fits easily into your smallest gear bag. Designed for advanced action sports photographers, advanced outdoor/wildlife photographers, professional video content creators, film production companies and feature film studios using DSLR and CFexpress mirrorless card cameras.